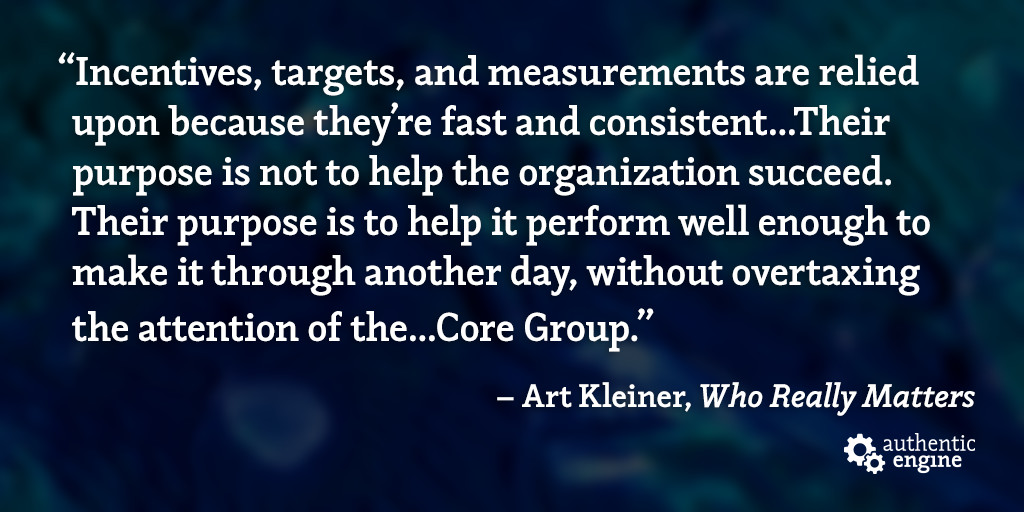 This post is part of a series summarizing the book and covers Part 2, Chapter 9: “Doggie Treats” (Incentives, Targets, and Measurements) . You may want to start with the introduction.

This chapter explores the impact of incentives and measurement systems on organizational performance and how they can distort the perceived priorities of the Core Group.

First, Kleiner introduces the “Balanced Scorecard” theory: To generate results, select strategically oriented incentives, targets and measurements. This is often referred to as “what is measured matters.”

Next, Kleiner argues that such metrics aren’t as integral to the success of organizations as their popularity by management would suggest:

Incentives, targets, and measurements are relied upon because they’re fast and consistent; they reach across an entire hierarchy with lightning speed. Their purpose is not to help the organization succeed. Their purpose is to help it perform well enough to make it through another day, without overtaxing the attention of the people in the Core Group, while reassuring them that the organization is under control. (p. 85)

Furthermore, the use of such incentive-and-target structure has drawbacks.

Firstly, it reduces the quality and depth of communication between the Core Group:

Estimates flow up the channel from employees, through bosses, to the Core group. Targets based on those estimates flow back down from the Core Group to the employees. Results flow back up again, and demands for better results back down again. All of these are expressed in terms of numbers alone, without an explanations of the meaning of the numbers. The numbers are sacrosanct o the page, but everyone knows how fictional they are in reality.” (p. 85-86)

Secondly, numbers detached from their context and history fail to address the ambiguities faced by decision-makers seeking to meet their targets:

Which performance targets must be embraced wholeheartedly, and which can simply be fudged for the next quarterly review? Which ‘stretch targets’ can be met simply by saying, ‘Well, we tried,’ and which require working all weekend and missing your kids’ soccer games? To what extent must people work alone to meet targets, and if they work collectively, how will the incentives recognize this? What are the he acceptable and unacceptable ways of fudging the numbers, and how can people avoid embarrassing themselves or the organization? In short, what sort of response to the incentives an measurements is acceptable around here? And what is not? (p. 86)

Not only do people answer questions about the numbers by interpreting signals from the Core Group, but they also interpret the Core Group according to the numbers. If the targets and incentives send a clear signal, they assume that is where the Core Group wants to go. The system becomes self-reinforcing and often times entrenched:

In many large companies, the measurement and control systems proliferate so wildly that they become, in themselves, a kind of robotic, machinelike Core Group. (p. 88)

To prevent this and create metrics and incentive mechanisms that help our organizations be successful, we cannot let numbers become disconnected from their context and meaning. We need to genuinely explore the value of measurements and incentives. We need to ask:

Which ones truly matter? Why do they matter? Who put them in place, and what where they thinking of? How do they help the Core Group get what it needs? Did Core Group members ask for those particular measurements? Do we know why? How well do they serve the organization now, and how well might they serve it in the future? (p. 88)

We also need to ask who is the best audience for our metrics?

Do we even need measurements and metrics that go up the hierarchy, or should we reorient them so that they people conduction the work are the same ones who receive all the measurement reports, instead of melding them into aggregate figures that ring up on an abstract scoreboard? (p. 88)

And, we shouldn’t exempt the Core Group from these discussions and ask “what are the appropriate incentives, targets, and measurements for Core Group members themselves?” (p. 88)

The discussion of measurement in this chapter prepares us for the next chapter on Welch-style management, which relies heavily upon performance evaluations.

Stay tuned for our next post in this series, a summary of Chapter 10: Welchism, which explores the effects of Jack Welch-style management on organizations though the Core Group theory lens.