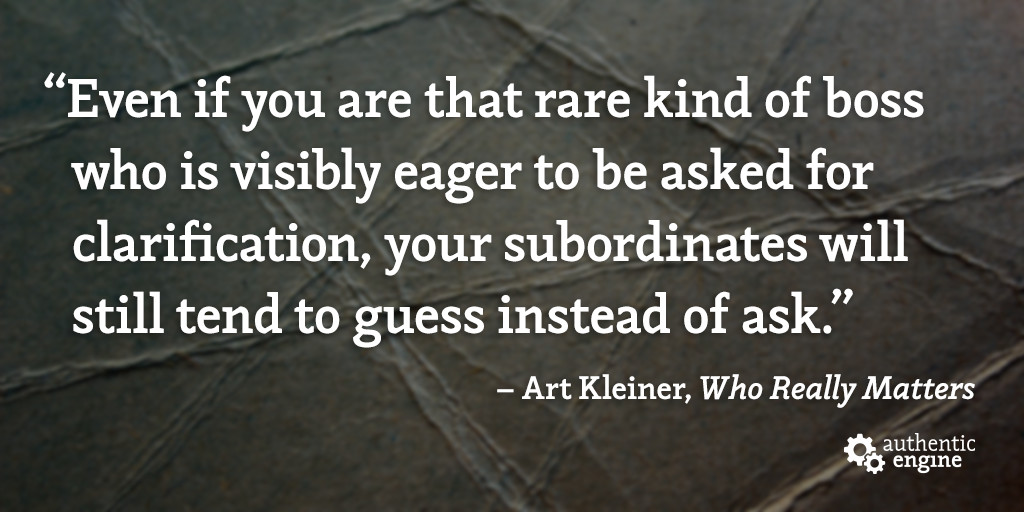 This post is part of a series summarizing the book and covers Chapter 8: Guesswork . You may want to start with the introduction.

This chapter explores the extent to which people make decisions about their work based on guesses about what the Core Group wants and how Core Group members can minimize the ill effects of this guesswork.

Using the example of Henry II’s off hand remark leading to the murder of the Archbishop of Canterbury, Kleiner explains that signals from the Core Group are amplified and distorted: “people hear them as louder, stronger, and more commandlike than they seemed to you when you uttered them.” (p. 75)

This happens because folks in organizations can’t know exactly what Core Group members want and they assume it is there job to figure it out, even if that means guessing. Should people want to ask Core Group members for clarification there could be any number of barriers to doing so: feeling intimidated by status differential, no clear communication channel, appearance of Core Member being too busy, etc.

Even if you are that rare kind of boss who is visibly eager to be asked for clarification, your subordinates will still tend to guess instead of ask. You would do the same. (Back when you were in their place, you probably gathered in the hall yourselves, lief your subordinates do now, and asked ‘What did the boss mean by that?’) They want you to experience them as trusted protectors of your interests and fixers of your problems — especially the interests and problems that you didn’t know you had. (p. 76)

The problem with guessing is that people generally guess wrong. This is because they guess based on the coarsest, most noticeable and thereby least nuanced signals from the Core Group. These signals by no means represent the actual intentions and desires of the Core Group and so people must fill in the gaps. And they do so based on what they would want were they in the Core Group, or what they imagine the Core Group to want. And they extrapolate without the benefit of the information and experience to which Core Group members have access.

A first step towards improving any organization involves reducing the level of distortion in the signals that the Core Group sends. (p. 80)

This means becoming much more aware of the signals you send, intentionally or otherwise, and crafting even the most casual of remarks very carefully.

The diagnostic exercise at the close of this chapter is particularly revealing about how Core Groups can work to reduce the distortion in the signals they send. For example:

Stay tuned for our next post in this series, a summary of Chapter 9: “Doggie Treats” (Incentives, Targets, and Measurements), which explores the impact of incentives and measurement systems on organizational performance and how they can distort the perceived priorities of the Core Group.