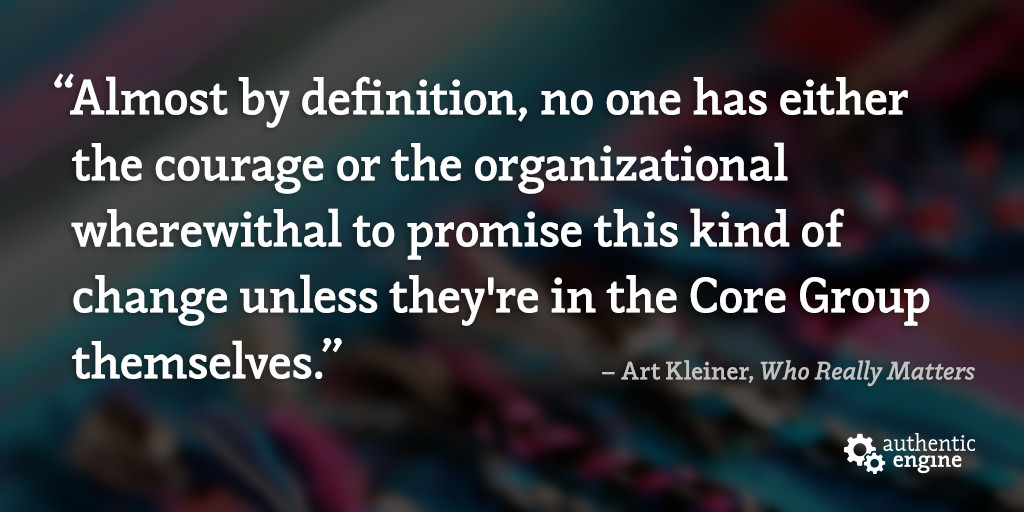 Summary: Some successful organizations have an “expanded Core Group,” meaning nearly everyone is part of the Core Group. The nature of these organizations varies, at each of them everybody’s welfare and development is one of the entire organization’s top priorities. It takes constant effort to create and maintain such organizations, but the anecdotal benefits are many.

Who Really Matters (Amazon, Goodreads, Powells) puts forth the theory that central to every organization is a Core Group of people who really matter.
This post is part of a series summarizing the book and covers Chapter 12: Expanded Core Group Organizations. You may want to start with the introduction.

Side Note: If you’re interested in learning about other expanded Core Group organizations, as discussed in Chapter 12 and below, I highly recommend Frederic Laloux’s Reinventing Organizations (Amazon). Laloux calls these “turquoise organizations” and includes several fascinating examples.

This chapter explores successful organizations that have an “expanded Core Group,” meaning nearly everyone is part of the Core Group.

Such organizations vary in their structure and operation, but share a common trait: Everyone’s welfare and development is one of the entire organization’s top priorities.

It takes constant effort to create and maintain such organizations. It requires that executives continually refine and expand financial structures as well as learning and development structures, ensuring they are ever more transparent and inclusive.

These types of organizations are not widely studied, so their efficacy is mostly demonstrated anecdotally. Klener spends a lot of time on one example, SRC International. SRC International, because they were facing going out of business, adopted “open book management.”

Under open book management everyone is educated about the company’s finances and has a part in developing strategy and direction of the company. This, coupled with employee stock ownership, has created several benefits for SRC International. It’s made them more resilient, enabling them to weather economic downturns and thrive during upturns. It’s also allowed the building wealth beyond the Core Group. It’s fostered a sense of mutual concern. Not only do employees to things to support one another personally, but they also work collectively to make decisions based on the interests of the whole company, rather than just themselves.

And he cautions that, as with Welchism, these systems can’t be applied piecemeal. They must developed by each organization’s Core Group with courage, thought, and care. And most Core Groups are likely unwilling to do the hard work this requires:

Because it would required most Core Group members to fundamentally change–not just what they say, but how they think, how they are paid, how they carry themselves, and how they build relationships. Almost by definition, no one has either the courage or the organizational wherewithal to promise this kind of change unless they’re in the Core Group themselves. Most of us, after all, have an unconscious vested interest in keeping ourselves and our organizations going in the same pattern of basic management where they already exist. We’ve invested our careers, our habits, our thinking, and our feeling in an organization that maintains its current Core Group form. (p. 115)

Stay tuned for our next post in this series, a summary of Chapter 13: Glass Ceilings, which explores the importance of Core Group diversity and inclusion.