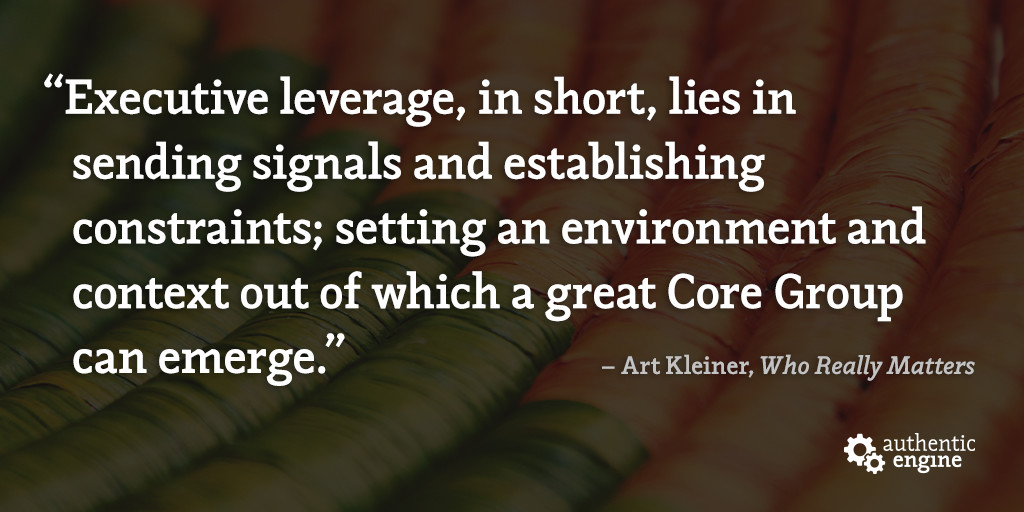 Summary: As CEO, you have formal authority, but it is constrained by guesswork as well as the priorities of the rest of the Core Group. The best way to use your power as CEO is to create the conditions out of which a great Core Group forms and operates.

This post is part of a series summarizing the book and covers Chapter 11: The CEOs Choices. You may want to start with the introduction.

This chapter explores the factors that constrain your influence as CEO and how best to leverage that influence.

Building upon Peter Senge’s idea of “leader as designer,” Kleiner proposes that:

Executive leverage, in short, lies in sending signals and establishing constraints; setting an environment and context out of which a great Core Group can emerge. (p. 98)

That is, the best way to use your power as CEO is to create the conditions out of which a great Core Group forms and operates. As CEO, you can affect the following:

The patterns of information and communication flow. As CEO, you have significant influence over the information available to employees and also how employees communicate with each other. Focus on making sure communication from the Core Group is well-conceived, deliberate, and consistent. Doing so allows you and the Core Group to construct and share a complex, yet coherent worldview to guide the organization’s work. Also focus on connecting people across organizational lines because no one else is in a better position to do and it likely won’t happen otherwise.

The support given for entrepreneurialism and error. The best way to support innovation and creativity is to give people the freedom to say no to trivial requests and the freedom to experiment without fear negative consequences. As CEO, make it clear you and the rest of the Core Group support these two freedoms across your organization.

The quality of your own leadership. Embody, with maturity and presence, what you want your organization to be. Start by recognizing the privilege of your position and commitment it requires.