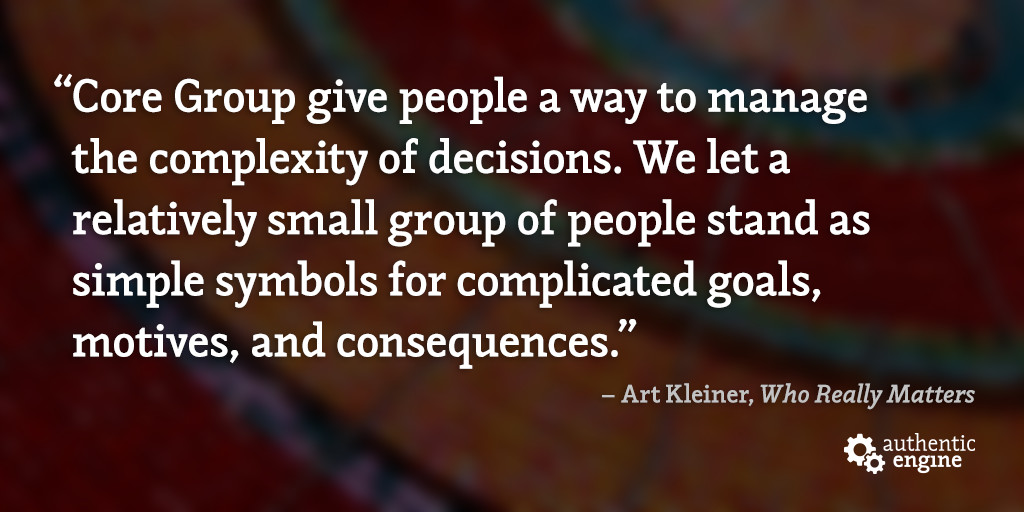 This post is second in a series summarizing the book and covers Part 1: The Reality of Organizations, Chapter 1 and Chapter 2. You may want to start with the introduction.

This chapter introduces the Core Group theory, that there is a “Core Group” of people who really matter, such that:

This chapter explains how organizations “think” and the critical role that Core Groups play in helping us orchestrate collective work.

Organizations are essentially the sum of all decisions made in them over time. An organization’s decisions coalesce into coordinate movement which becomes it’s own emergent form, a kind of “hive mind.” The Core Group steers this hive mind. This is possible because the

“Core Group gives people a way to manage the complexity of decisions. We let a relatively small group of people stand as simple symbols for complicated goals, motives, and consequences.” (p. 16)

In this way, we use the Core Group to “anthropomorphize our business environment.” (p. 16). It is cognitively easier for us to ask, “what would so-and-so want me to do?” rather than keep the multitude of factors, constraints and conflicting priorities in mind for every decision we need to make. The concerns of the Core Group trumps all others not due to some mystical power but through the cumulative effect of all decisions in the organization.

Stay tuned for our next post in this series, a summary of Part 1, Chapter 3: A Field Guide to Some Common Core Groups, which describes common patterns in Core Group membership.