Using your “whiskers” to detect disruptions you cannot see 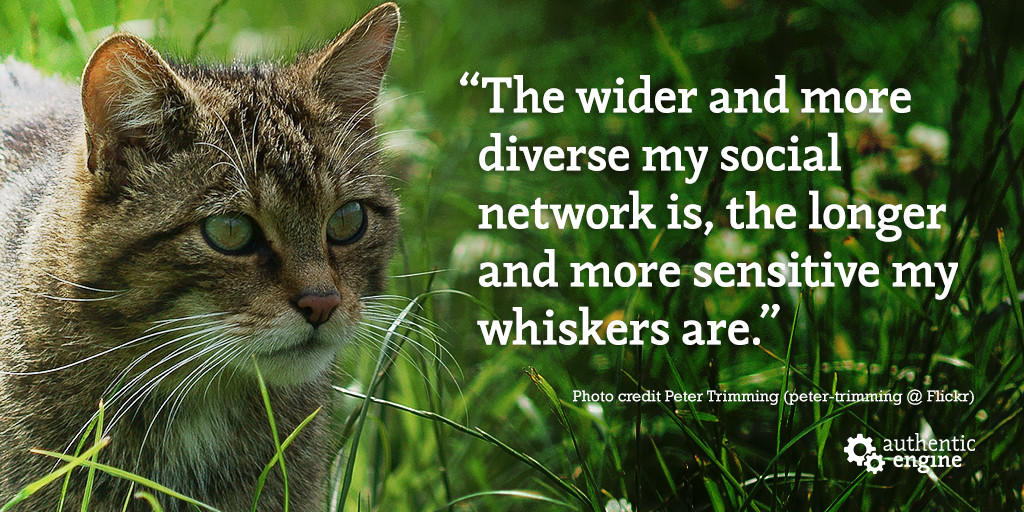 When we started talking about the World Wide Web, it always went with a graphic of straight lines from data node to data node. We watched the brilliance of messages that were constructed so they could route around disruptions in the network. We have this whole mental model of linear relationships, binary gates, and yes-no answers.

In my experiences, that’s a very partial model. I think of the way I experience the world as having whiskers. I’m not a dot sliding along a line, I’m a cat walking through tall grass. I can’t see everything past the grass, but my paws and my whiskers tell me about disruptions, things that may be a danger to me even though they are not in my line of sight.

The wider and more diverse my social network is, the longer and more sensitive my whiskers are. For example, recently I noticed two people post oddly similar tweets about leaving the same company. Neither of them said outright that they’d been fired, but I knew one of them had ongoing plans with the company, so it would be very surprising to leave at that point. I pinged a friend in the same field to ask if she knew anything else, and we ended up talking about other signs that there is a decline of irrationally exuberant investing in startups. Since my target demographic is startups, that’s good and useful data for me to gather. I’m alert, slightly less inclined to lie around sunning my tummy and more interested in hunting and staying safe.

I’m not panicked, it’s just that I got some bits of data that indicate caution, and not because I’m reading Economist articles, but because I’m picking up on micro-vibrations in a field that is important to my career.

Sometimes, this sensation is overwhelming and kind of scary. This time last year, I started worrying about a prominent tech feminist non-profit I cared about. People I respected were leaving, silently. The search for an Executive Director seemed like it had been taking forever. There were rumors about the end of programs. As I reached out, my connections all agreed that there was something going wrong, something was happening, something was rotten in Denmark, but none of us knew what to do about it. I just kept being alert and asking questions and nosing around and connecting people with similar stories. This whole time, I felt like there was something going on just outside my range of perception. I could feel the effects, the ripples, but I couldn’t see what was going on directly. As my questions got more pointed, I was blocked, and so I knew my questions were unwelcome. In the end, the organization did fall apart, in just about the most comprehensive way possible, with the dissolution of it’s global community and the dismantling of the valuable lists. This article is not that failure analysis, but when it happened, I was saddened, but not shocked, because I’d known it was coming.

I think under-represented people tend to develop more of this alertness than people with more institutional privilege. It’s a logical adaptation to a world where you are reminded all the time of the precarity of your employment or even your bodily autonomy. The CDC’s change from “fetus” to “unborn baby” in a single statement made my whiskers, my threat sensors, quiver madly. If you identify something inside my body as a full human, then I lose control of my body and my choices. I imagine that thousands of men and women glossed right past that wording. Only people who spend a lot of time thinking about bodily rights would have whiskers that extended that direction.

There’s a downside, of course. First, the longer and more sensitive your threat-detection devices are, the more false alarms you’ll get. Sometimes it’s something that is real, but probably not a threat to you. Sometimes it’s something so distant that everyone thinks you are just imagining it, even though you know it’s real. I think that’s why so many people (including me) never notice they are committing microaggressions. We just don’t see it. The second problem is that cultivating the networks, the time, the awareness, the pattern-recognition to accurately figure out what is happening is exhausting. It means being on high alert all the time, and sifting through vast amounts of data in search of very small indicators. It’s a massive tax on people who feel the need to be alert.

My whiskers go off when my company is in financial trouble, when my boss is cross at me, when someone is behaving in a creepy/predatory manner. Those are valuable alerts. My whiskers also go off when my spouse is cranky, even though they are in chronic pain. That is not a valuable alert. Learning to distinguish what is causing you fear and unease is the work of a lifetime, but it’s work that needs doing.

Some people journal, writing down their guesses and then going back and seeing if they were correct. Some people cultivate security so that they don’t have as much to worry about. A year’s living expenses insulates you from a lot of concern about how unreasonable your boss is. Some people go to couples counseling, or get divorced, or take to communicating in the way that they find least alarming. I can’t tell you what will mitigate that feeling of constant alertness for you. I can tell you that living in a constant state of fear and attention is hard on your mental health and your ability to see the other patterns in your life.

Your perceptions are valuable, and important. They are the real world that you are experiencing, and never let anyone tell you otherwise. But if you are constantly scared, you need to either change yourself, or change the world around you.

This post is part of our First Person series in which guest authors share personal stories about leadership and career development.